Justin Guterding earned a reputation as a finisher when he buried 52 goals on 39.4% shooting as a freshman. After Myles Jones and Deemer Class graduated in 2016, Guterding took on a larger ball-carrying role – and he thrived in it. As a junior Guterding finished fifth in the nation with 26 unassisted goals (per analyticslacrosse.com) and third with 46 assists. He’s not just a finisher; he’s an elite scorer and feeder.

You can’t put too much stock into Duke head coach John Danowski’s offensive schemes in February. The Blue Devils use the first half of the season to find their team’s identity, and then they gameplan around that. Some years you will see them running pairs sets in May; other years they will keep opposing defenses on the carousel with a motion offense. 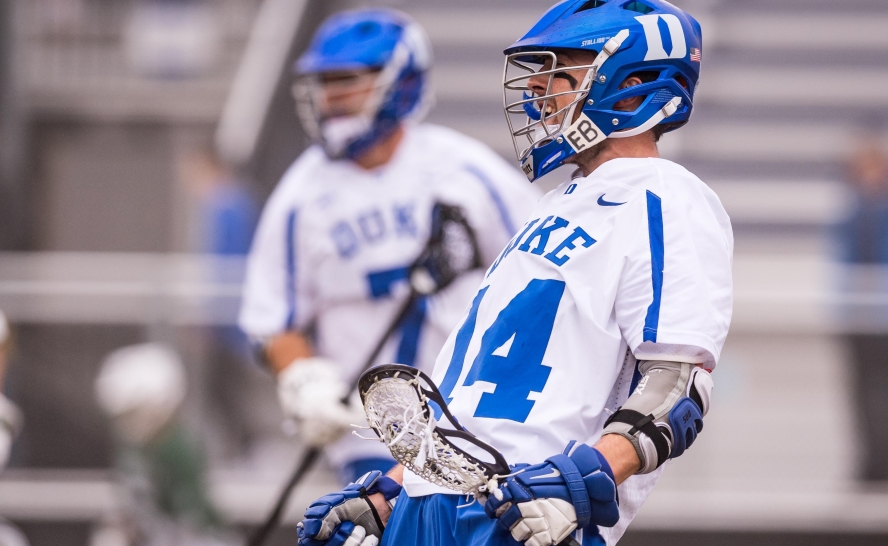 Guterding (12G, 15A through three games) can be deployed anywhere and in any offensive scheme. Already this season, Duke has used him as a pick-and-roll operator at X, as a picker, and (when a short stick is unfortunate enough to be defending him) as an isolation dodger. One way that we’ll be sure to see Guterding – and likely other attackmen around the country – used in May is on pass-down pick-downs on the wing.

Pass-down pick-downs are wildly popular in transition. If you have a four-on-four “break,” then a quick way to create a numbers advantage is to have your clearing defensive player pick for an attackman. Those picks put the transition defense in a bind. If you switch, then you have an offensive player on an opposing attackman. Odds are that player won’t be able to get off the field until the possession ends. If you don’t switch, then you are asking your on-ball defender to fight through a pick and re-engage the ball carrier before he’s in a high-quality shooting area.

Defenses encounter those same dilemmas in six-on-six settings, yet pass-down pick-downs are much less prevalent. Canadian players with box backgrounds (i.e. Chris Cloutier, Tre Leclaire) thrive on the wing, either as dodgers or running pick-and-rolls. The American way is to put your best initiator at X – but that trend is slowly dying out.

Shots created by a two-man game at X last summer in MLL produced a shooting percentage of 28.8%. When the action that initiated the shot was a two-man game on the wing instead, shooting percentage scooted up to 33.3%. Actions above the cage leave the defense less time to recover. Fighting through is not a matter of eluding the picker; it requires the on-ball defender to get back on the ball-carrier’s hands as soon as possible.

Guterding’s defender doesn’t get clobbered by that first pick, but he doesn’t make contact until Guterding already has a full head of steam and is inside the hash marks. On the second pick, he is absolutely blindsided – and his teammates have no time to make an emergency slide. Coaches aren’t yelling from the sideline for Guterding to take that “one more” step – he’s there already.

An important caveat for those who are not MLL fans: Defenses are less matchup conscious in the pro game. The 60-second shot clock serves as an opportunity to reset matchups. These actions produce 33.3% looks in MLL, but I wouldn’t be surprised if the shooting percentage was even better in NCAA given how matchup conscious most college teams are.

Another bonus to the two-man game is that it depletes the number of players in a slide package. When these actions do generate a slide, the offense finds the two-on-one much quicker. Think of it this way: There are five off-ball players against a dodge, but there are four off-ball players against a two-man game. Jacksonville slides from the crease here, and in just one pass Joe Robertson and Sean Lowrie are playing two-against-one on the inside.

Those picks – getting the ball-carrier open on his natural side – are seen five or six times in a single possession in box lacrosse. As he has done so well over the years, Coach Danowski blends the box style with his field players’ skill sets to form a hybrid offense by up-picking for wrong-sided alley dodgers. Who better to serve as the up-picker than Guterding?

The degree to which defenses are looking to fight through a pick changes when a short-stick is on-ball. Picking with Guterding takes the same dilemma we just saw and flips it on his lacrosse head. Help from Guterding, and he’ll catch in a spot where he can capitalize on an approach and scan the field. Don’t help, and a Duke midfielder will have a clear path to the cage.

The picker’s man will usually drop on that action, providing his on-ball teammate room to fight through. The tradeoff? Now you’re ten yards away from Guterding when he catches. Duke’s collective offensive IQ is through the roof. Seals like this one by Joey Manown can create an open man for Guterding to find even if there’s nobody open initially.

Lots of players play full-time on the wing because of their one-handedness. Guterding’s two-handedness adds to his versatility. He can operate the pick-and-roll from directly behind the cage with a two-way go. He can play off-ball. These two-man games on the wing are clicking right now. Regardless of whether Duke leans on them in crunch-time come May or some other set, one thing is for sure: Guterding will play a pivotal role.